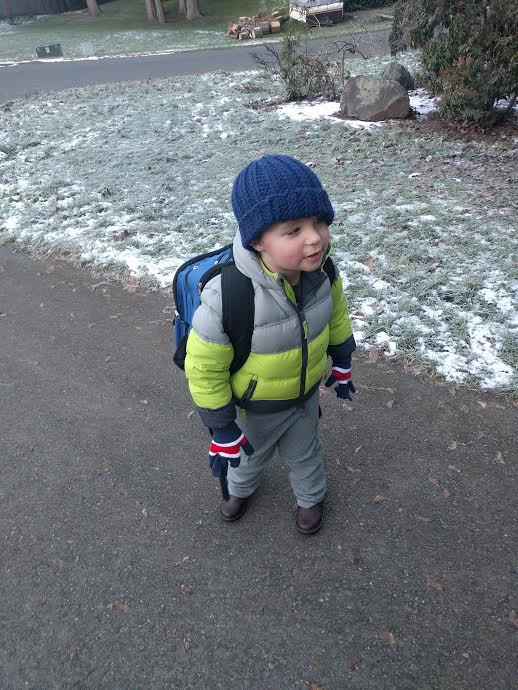 If you live somewhere that gets truly cold, be prepared to laugh at me, but here in Seattle it was BELOW FREEZING. For SEVERAL DAYS. Which basically means ARMAGEDDON.

For example, several of our district’s school buses froze up and wouldn’t start. (Okay, I don’t think anyone admitted that they wouldn’t start because of the cold, but it supports my ARMAGEDDON theory so I’m sticking with it.) That happened to us on Wednesday, and I ended up driving the boy to school, which actually resulted in a pretty fantastic morning. We got a little treat at Starbucks (I can get to the school a whole lot faster than a bus making stops, so we had time to kill) and then spent the whole drive singing along (appropriately enough) to the soundtrack from Frozen. And if you’ve never heard the boy sing, you’re missing out. He’s got this hilarious way of improvising and harmonizing and he’s very enthusiastic.

Okay, so the buses allegedly freezing up is the only point I have to support my ARMAGEDDON theory, but it was cold enough that the snow we had over the weekend stuck around and there’s a river of ice along the base of our driveway, on which the boy had his first slip-and-fall. (He’s fine. He just learned that ice is slippery, which works since “slippery” has been one of his new favorite words.)

We’ve had a lot of fires in our lovely fireplace.

We’ve struggled with coats and snow pants and hats and boots and mittens. I think the girl’s first complete sentence is going to be “I can’t put my arms down!”

My geeky husband has spent a lot of time watching the weather and tracking our energy consumption.

I’ve online “window” shopped for a lot of sweaters: for me, for the kids, and the chickens.