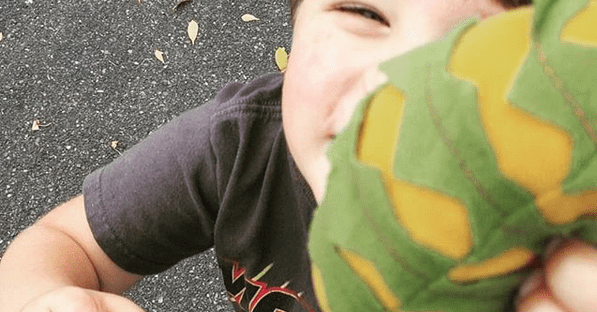 The other day, my son hit a major milestone, though it might not be marked in most kids’ baby books: he made a friend at the mall play area.

My son was the biggest kid there that morning, by both height and age. Technically he’s too tall for the play area but to anyone who might quibble with me about this I say: He’s four, going on five. He’s gentle. Why should a runty, rowdy six-year-old get to play here and he doesn’t?

Anyhow, the play area was starting to fill up and I was starting to think about leaving when this kid shows up with his mom and baby sister. I can tell from the way he moves and talks that he’s Sam’s age, but developing more typically. He’s shorter by a good six inches, but so are most four-going-on-five-year-olds (see the previous paragraph). He spotted Sam immediately.

“Do you wanna be my friend?” he said, getting right in Sam’s face. Sam looked away, as he usually does when someone makes aggressive social contact, but he sort of smiled. Mostly he seemed confused as to what this kid was doing. The kid kept engaging him and his sister, who was pretending to be a tiger. The kid wanted to play “airplane zombies.” Sam didn’t know what to do.

“How do you play airplane zombies?” I said. (Sam had come to sit with me and the kid had followed.)

“Maybe you can play tag,” I suggested. Sam knows how to play tag. Kind of.

“No, it has to be airplane zombies.”

It went on like this. Eventually, the kid grabbed a big stuffed spider he had brought with him and said, “We’ll pretend this is a football!” He threw it and chased it. Sam loved this. They threw it and chased it and kicked it, then decided that they were invading the castle and the peg puzzle on the wall was a treasure map and then it was a zombie map and they had to move all the zombies. The kid hugged him a couple times, which Sam tolerated despite his apparent alarm. When we decided to leave the play area and go play blocks in the Lego store, the kid convinced his mom to go to the Lego store, too.

I so rarely get to witness my son interacting with children in this way, both because the bulk of his same-age interactions are at school, and because the other kids we see have either known him forever and/or don’t really seek him out. He likes to play alone or with his sister, and if he decides to play with the other kids at a play date, well, they know he’s an oddball. They know he doesn’t speak like they do. They’re used to him.

I was in awe. When the kid overwhelmed him, he used his words and told him to stop. He checked in with me frequently, but he never looked panicked and he never asked to leave. He was glad when the kid showed up in the Lego store and they played blocks together and walked the edges of the store, looking at the displays.

Sometimes, I look forward and worry. I imagine potential jobs for my son, how he’ll deal with coworkers and bosses, how he’ll get through school. I wonder if he’ll always be in special education or if he’ll be mainstreamed. Will he need to be homeschooled? If so, how will I socialize him? Will he ever know romance? Will he have close friends?

In a situation like we had at the mall, however, I see the signs. I see him protecting his personal space and avoiding eye contact. I see him wrestling with himself.

The amazing thing is, he wants to wrestle. He wants people. He wants friends. He wants to touch and be touched, to look into the eyes of the people he loves, and he’s willing to be uncomfortable to do it. This is what gives me so much hope for his future. This is why we say he’s “high functioning.” This is why I know he’ll be okay.