I am an unashamed fan of pumpkin. When pumpkin spice mania begins, I’m right there baking pumpkin bread and ordering my pumpkin spice lattes. But that’s not the only way to use pumpkin–I mean, “pumpkin spice” doesn’t really mean it tastes like pumpkin, but some combination of cinnamon, nutmeg, allspice, ginger, and/or cloves. I like my pumpkin savory. Which is why when the weather gets colder, I make a big pot of pumpkin & chipotle chili.

Maybe the thought of pumpkin in chili makes you gag a little. If so, let me ask you what does pumpkin taste like? Not pumpkin spice: pumpkin. The fruit (botanically speaking–culinarily speaking, it’s a vegetable). Takes a little thinking, doesn’t it? Because we mostly drown it in cinnamon and sugar. On its own, it’s something between a carrot and a red bell pepper, with a little butternut squash thrown in.

Pumpkin lovers like me know it’s great in soup, stew, pasta sauce, pasta filling (think ravioli), risotto, and more. It’s most commonly paired with sage and I love that, but pumpkin and chipotle peppers–it’s a great example of opposites attracting.

Though they’re not that opposite, considering they’re both fruits that are commonly regarded and used in cuisine as vegetables. You know, with the seeds and all–

Okay, I’m getting too geeky. You probably just want the recipe, huh? Well, here you go.

2 tablespoons olive oil
1 large yellow onion, diced
1 large red bell pepper, diced (and another for garnish, if you like)
2 pounds ground turkey (optional; this also works as a delicious vegan dish, but if you cut the meat you might want to double the beans)
1 tablespoon ground cumin
1-2 tablespoons chipotle chili powder (depending on your heat tolerance) or 1-2 chipotles in adobo, finely diced (if you can’t find the powder (real chilies also make it hotter)
1 28-ounce can diced tomatoes
2 15-oz cans kidney beans (all red or all white but one of each is best)
1 15-oz can pumpkin puree
various garnishes, to your liking (sour cream, diced bell pepper, green onions, cheese…)

In a large pot or Dutch oven, heat the olive oil over medium heat until it shimmers. Add the onion and about a teaspoon of salt; cook for two to three minutes, until soft. Add the bell peppers and cook a minute or two more. Add the turkey, breaking it up into small pieces as it browns. Add the cumin and chipotle before the meat is fully cooked, letting it toast nicely in the oil before adding the tomatoes, beans, and pumpkin puree.  Bring to a boil, then reduce to a simmer and cook for 30 minutes or more, stirring occasionally and allowing it to thicken to your liking (I like my chili super thick). Be sure to taste for salt; I don’t put a ton in my chili but you might like more. The longer you cook it, the better the flavor–unless you burn it of course. Cooking 101: Don’t let it burn.

This is such a warm, flavorful meal–and if you don’t overload it with cheese and sour cream, it’s also really healthy. Lots of veggies. Protein. Add some turmeric if you want to kick the health factor up even higher, and I bet you could use coconut oil to brown the onions (not that olive oil isn’t healthy, too).

The pumpkin flavor isn’t too overt here, but it provides a nice sweetness and makes the stew extra thick and luscious (you might be thinking chili is a soup, not a stew; I humbly disagree). 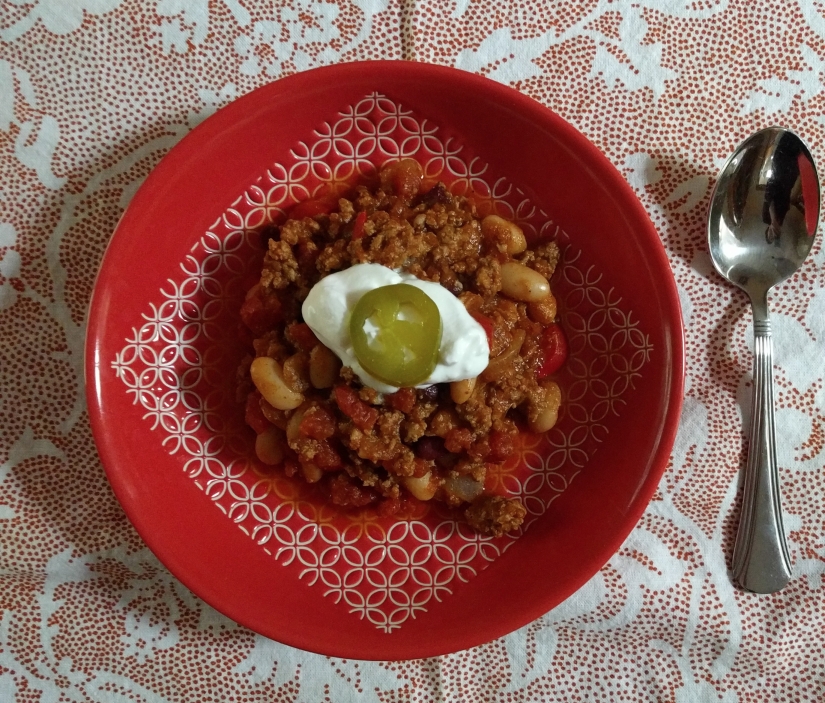 Whatever you call it, I think you’ll love it. So grab a pot, get your chili simmering; it’s almost officially fall!

1 thought on “The Best Meal for That First Chilly Day”