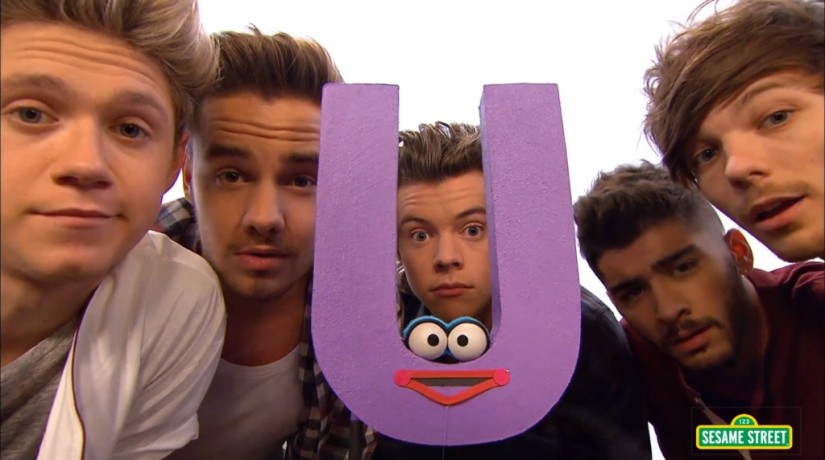 I can’t remember what year it was, but I first learned about One Direction at the movie theater. They had a documentary/behind-the-music thing coming out and when I saw the trailer, it took quite a while for me to realize it was serious. I thought: mockumentary. I thought: I bet Christopher Guest is playing their manager. (Call Rob Reiner! Make it happen!) But no–these guys are really a “band.” A boy band.

The next time I encountered One Direction was about a couple months ago, when my daughter’s Elmo obsession led us to their appearance on Sesame Street, singing “What Makes U Useful.” I cracked up the whole time we watched it. It is now one of my very favorite videos on YouTube.

I have never been a particular fan of boy bands. Like many of my generation, I have rocked out to N*Sync’s “Bye Bye Bye” and the random Backstreet Boys song. They’re catchy and fluffy and fun–still, I was never a real fan. I can’t name a single Backstreet Boy and I only know Justin Timberlake because of his solo success. And another N*Syncer became an actor, I think–Joey?–he was in My Big Fat Greek Wedding.

Mostly, when I think of boy bands, I think of the fictional group on Bob’s Burgers: Boyz 4 Now. While the producers of the show say it parodies boy bands in general, rather than one specific group, they will say they looked to One Direction for inspiration. Which makes a lot of sense, especially with lyrics like,

Now, the one One Direction song I’ve actually heard is pretty old (“What Makes You Beautiful,” on which “What Makes U Useful” is based) but the whole talking-to-the-girl trope and the tendency to exploit their listener’s desperation for the right kind of boy’s affection seems pretty typical of boy bands. Which is why singing to the letter U cracked me up so hard. Also, the kid in the middle (Harry?) looks so much like the kid I had a crush on my freshman year of high school, but prettier and obviously way nicer than the boys I knew in real life and do you think if fifteen-year-old me met fifteen-year-old him they’d totally fall in love, you guys? Because fifteen-year-old me might have been more into boy bands if she’d only been in the right place and time. But–alas and alack!–she was not.

I did have so many celebrity crushes growing up. And real crushes. The first boy I ever “liked” was in kindergarten–is that normal? I mean, it was an innocent, little girl “like” but I was still aware he was a boy and that he was cute and all that. And I watch my daughter watching these videos and I wonder what she’ll think of them as she grows older, and if she’ll fall victim to all the fairy tales and boy band bullshit out there, and if that’s really as bad as I might make it out to be. Or will she be a little cynic, laughing her wry laugh at the world? And how do I help her land somewhere in between?

2 thoughts on “Sesame Street, Boy Bands, and Other Parts of Growing Up”